Become the leading online resource for people with a wildlife or pest problem and connect them with the best service provider in their area.

In pursuit of this mission, we want to be growing and building a sustainable business for each of our pest & wildlife control clients, and maintain a strong collaborative relationship with them.

We have been building & ranking websites to supply pest & wildlife control leads to our clients for over 15 years. We have a proprietary framework that consistently works but requires a lot of time. Our deep experience in content marketing and SEO (especially technical SEO), combined with years of pest management experience has enabled us to develop a proprietary framework that grows traffic from search engines.

AAAnimal Advertising got its start as AAAnimal Control with a deep-rooted history in the Wildlife Control industry. 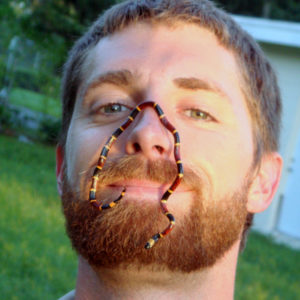 This company was founded by David (pictured with a juvenile Eastern Coral Snake on his face). He was a former nuisance wildlife control operator (NWCO) with over 7 years of experience in the field. Before getting into the wildlife control industry, he was a computer programmer for a large financial institution. His degree was in Computer Science from University of Notre Dame, Go Irish! Back in 2003, David built aaanimalcontrol.com and a few other wildlife websites to help people searching the internet resolve their wildlife conflict. Quickly his websites were generating more calls and business than his Yellow Pages ads. Overwhelmed with calls for wildlife control, David looked for help.

Enter Kirk LaPierre (1959-2010), a man who had the energy of ten men, and he poured it into the Wildlife Control industry.

From training seminars, to advocating for the industry in DC, to posts and podcasts, to his own Uncle Kirk's Magic Gold Rodent Lure, Kirk was working to bring credibility, integrity, and maturity to the industry. As a result, he was very well known by most nuisance wildlife control operators (NWCO) at the time. He ran A-1 Saver Wildlife Control company in northern New Jersey. Kirk found the AAAnimal Advertising network, like many, doing a google search. He proposed a free listing for his business in exchange for a fair review to his colleagues. David could not refuse the offer and his charm. Kirk's business shortly tripled, and from that point forward he became a strong advocate for the advertising services AAAnimal Advertising provides. He told every living NWCO across the land about it. At every seminar that Kirk spoke at, he would end this talk with "If you are serious about growing your wildlife business, give David a call and check out aaanimalcontrol.com." Most of the AAAnimal Advertising's early clients who signed up from 2003-2009 were a direct result of Kirk's recommendation. AAAnimal Advertising grew rapidly, as of course did all those who signed up. Kirk played an integral role in the growing and establishment of AAAnimal Advertising. And this is the sole reason we still keep AAAnimal antiquated name today.

From there it is all history, the company grew by building more websites, perfecting content marketing, leveraging technical search engine optimization (SEO), and getting more high integrity clients. Every year we have grown traffic and increased rankings in Google, Bing, Yahoo, DuckDuckGo , etc.

Today, AAAnimal Advertising has over 200 clients across the globe, targeting over 1,100 cities for 4,800 keywords that convert to paying customers. Out platform get over 75,000 visitors a day that provides thousands of quality pest & wildlife control leads.

At a young age, David was not your typical boy. Not from the sense of his obedient and easy going demeanor, but from the activities he engaged himself in and the volume of effort he put towards them. He harbored a unique obsession for animals and insects. Collecting, identifying, categorizing, and displaying thousands of various creatures in his Pennsylvania home. David wanted to know everything there was to know about the insect and animal world, digesting entire volumes of the encyclopedia in a day. Even when building snow men, David would construct a dozen while his best friend Rob could only make one in the same amount of time. David has a unique ability to learn and build at an extraordinary rate.

Fast forward to the computer and internet era. David was accepted into the prestigious Catholic University of Notre Dame during the infancy of the dot-com era. By this time David was obsessed with the internet and the capabilities of computers. He had dreams of learning from the best and brightest from a top 20 university. But sadly, he was let down. Most of the competent computer science professors had left academia to pursue dreams of wealth from the boom of the dot-com bubble. He found his computer science education to be more theoretical than practical. After graduation, David decided to work for a large financial institution in hopes of acquiring more applicable skills in his field. Some of the most advanced software was being developed by financial institutions and he was seeking to learn from one of the best.

After a couple of years in Corporate America, David was feeling unfulfilled. While he was able to develop strong capabilities in software development, building processes, and prioritizing his work. There wasn't that excitement he had once felt from learning and creating, like he had at an early age when he build his extensive bug collection. Deep down inside David had a yearning to be more connected to nature and animals, instead of working in a concrete jungle.

Enter Phil Nichols. Phil was the most one-of-a-kind wildlife operator in the world, and the most fun. 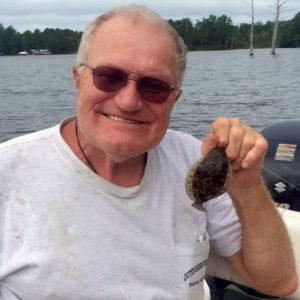 David got his start one fateful day when he asked his hometown fishing buddy Phil to show him the ropes of wildlife control. Phil responded with "You must immediately go out and buy a stout rope, 3/8" hemp or equivalent. Tie the rope to a beam and make a noose and, no, no, never mind." Instead of hanging himself, David did indeed train with Phil for two years. Phil got free work, and David got some of the most fun of his life, sniffing possum butts and unsuccessfully attempting to swerve to run over every squirrel that ran in front of Phil's truck. David kept his promise to not compete with Phil in Philadelphia, so he moved to Orlando and started his business there. He remembered many lessons from Phil, the most important of which was to have fun on the job. Phil's primary interest in David's work down south was, "How does armadillo meat taste?"

David spent the next 5 years operating a very successful wildlife control business. He was finally fulfilled by being able to catch critters, like in his childhood days, while making a living at the same time. David was so fulfilled by his job that he found himself working 7 days a week and 350 days a year. He was so crunched for time, David's time at the grocery store was under 7 minutes as he threw anything he found into the cart and bought loads of peanut butter for its high caloric to volume ratio for efficiency on the job. Also during this time, David trained 11 different friends & family in the field who all went on to build successful wildlife businesses, perfected many wildlife control techniques that are found on our sites, and build the many websites we have today.

Over a decade ago, David sold his wildlife control business and has been solely focused on doing online marketing for this industry. He has hired marketing staff, brought on partners, and has continued to build the business. Today, David sets the content strategy and is the senior editor. He has a very limited role in the day-to-day operations.

Today our team has grown to double digits, all focused on online marketing for the pest & wildlife control industry. 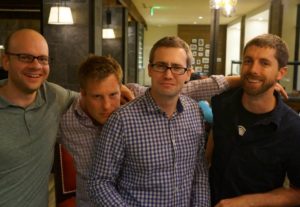 We have a deep experience in 3 major functions: 1) content marketing, 2) technical SEO, and 3) project management.

What differentiates us from the other online marketing agencies is that we have staff with a combined experience of over 15 years in the field as technicians for the pest & wildlife control industry. We know your industry and business extremely well, just read the content on our websites or give us a call. We also know industry best practices, business models for various pest animals, operations, sales techniques, and how to maximize your profits.

We are always looking for top talent. If you are interested in joining our team, we reach out to us.

Let us drive your pest or wildlife control company to new heights by utilizing our services in lead generation, online advertising, and website creation. We have over 15 years of experience in online marketing and advertising for the pest & wildlife management industry.